This miniature 2-channel wireless DMX dimmer disappears into costumes, compact props, lamps, fabric and even hair. The DMX2micro is also eligible for the RC4Magic Two-Year Warranty, the only one of its kind in the industry. ** This version uses a built-in chip-antenna, no external antenna needed. ** 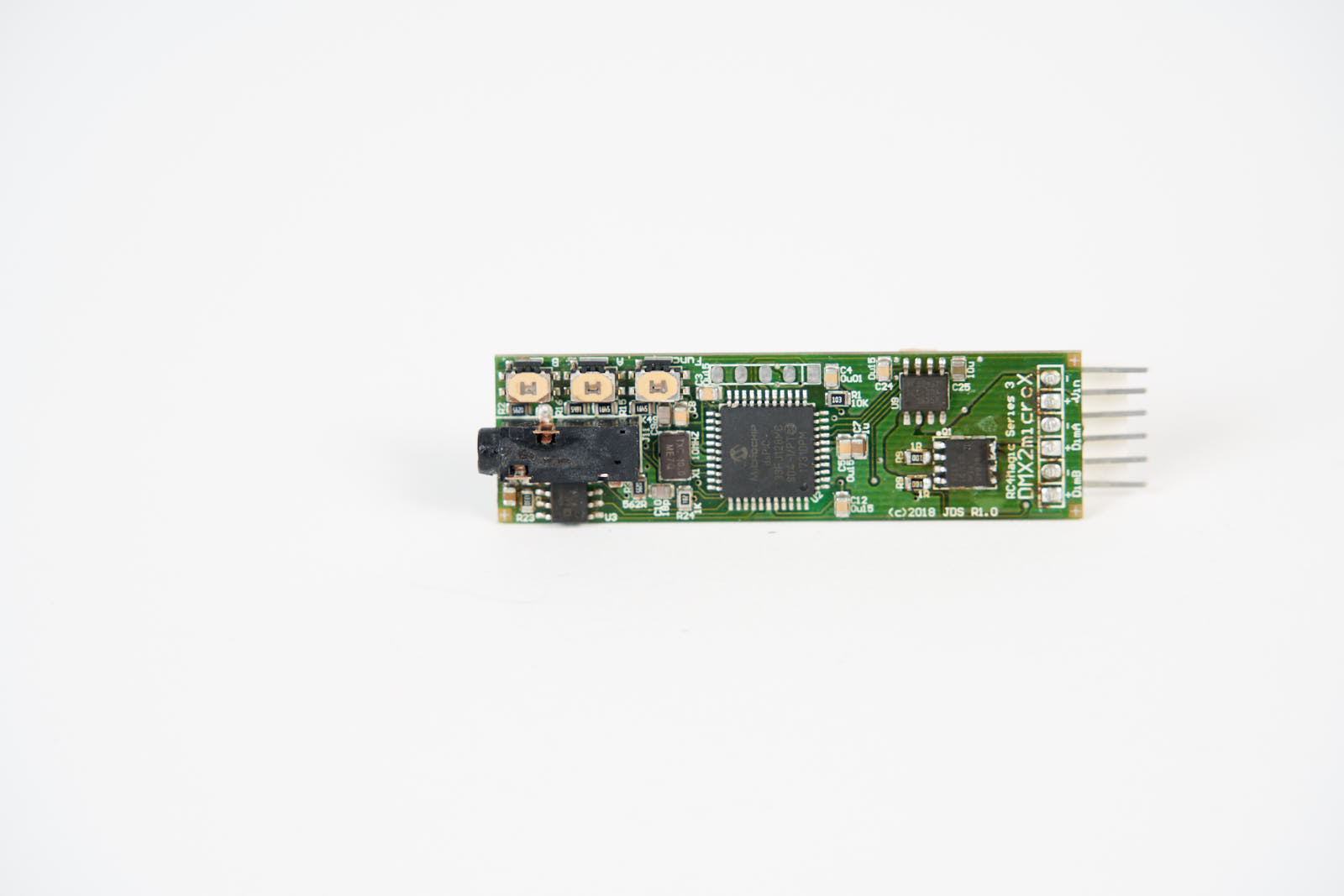 The RC4Magic S3 DMX2micro is the smallest wireless two-channel DMX 512 dimmer on earth. It is perfect for concealing in costumes, compact props, lamps, fabric and even hair. How small is the DMX2micro? This fully functional, two-channel dimmer is under 3” long, and is tiny enough to be hidden almost anywhere.

The RC4Magic S3 DMX2micro includes a built-in radio receiver and uses RC4 OneTouch™ for easy assignment of any DMX channel and dimmer curve to any dimmer with a single press of a single button. Device configuration can also be done with Remote Device Management (RDM) and RC4 Commander Configuration Software. 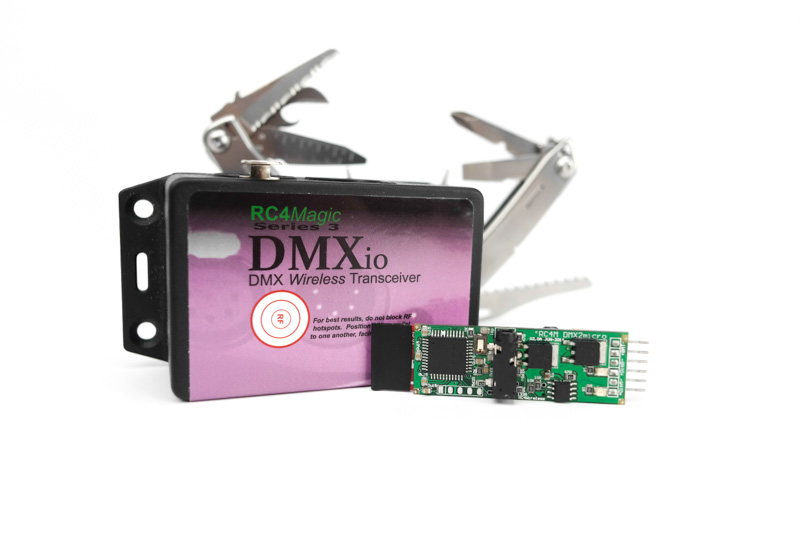 Even though the DMX2micro is tiny, it has the power of the RC4 Wireless platform behind it. Like the standard DMX2dim, the DMX2micro features 19-bit dimming, which is eight times finer than 16-bit with a whopping 524,288 steps of resolution.  For users, this means exceptionally smooth LED dimming, especially at the bottom end of the curve, which can be problematic. All SX dimmers also feature dimmer curve cross-fading to each individual dimmer; this enables users to tweak the dimming curve 256 steps for each separate dimmer output.

Since it’s a two channel dimmer, the DMX2micro is ideal for use with the dimmers built-in RC4 Flkr Effects Engine™. Using DMX channels for control, dynamic animated effects are easily and quickly created — this is not a canned effect generator, it is a tool for creating unique looks to suit any need.

A small Amp MTA-100 6-pin connector is provided for connection of power supply and dimmer outputs. Each device is provided with one connector with 6″ (15cm) leads.  Input DC powers both the internal electronics and the connected loads. Dimmers switch on the negative side of the circuit, ideal for common-anode (common positive) LEDs and LED tape. Dimmer output voltage is precisely the DC power input voltage with no appreciable losses within the 10A peak power handling limit of the device. Continuous running power is limited to 6A due to the safety rating of the Amp MTA-100 connector pins.

The mini-plug wired DMX data port can be used with a range of RC4 DMX cables, including 3-pin and 5-pin male and female XLR adapters. The most common adapter is the RC4DMX5FA with 5-pin female XLR connector. This port can output DMX data to nearby fixtures including fog machines, moving lights, and projector dousers. The DMX port can also be configured as a DMX input, allowing the DMX2micro to be used as a wired dimmer.

Projects and productions in the USA, Canada, Australia, and New Zealand should consider our RC4Magic-900 system. The 900MHz band is far away from WiFi, Bluetooth and other 2.4GHz wireless technology.  For worldwide use in all markets, the 2.4GHz RC4Magic system is recommended.