A low-voltage 42A 4-channel wireless DMX dimmer for LEDs, lamps, and motors in set pieces, props, costumes, and more.  RC4Magic-900 operates in the 902-928 MHz RF band, licensed ONLY for use in USA, Canada, Australia and New Zealand.  In other jurisdictions, including Europe, Asia, and Africa, our 2.4GHz RC4Magic Series 3 system is ideal.

Each DMX4dim-500 purchase comes with one set of Anderson Connectors. 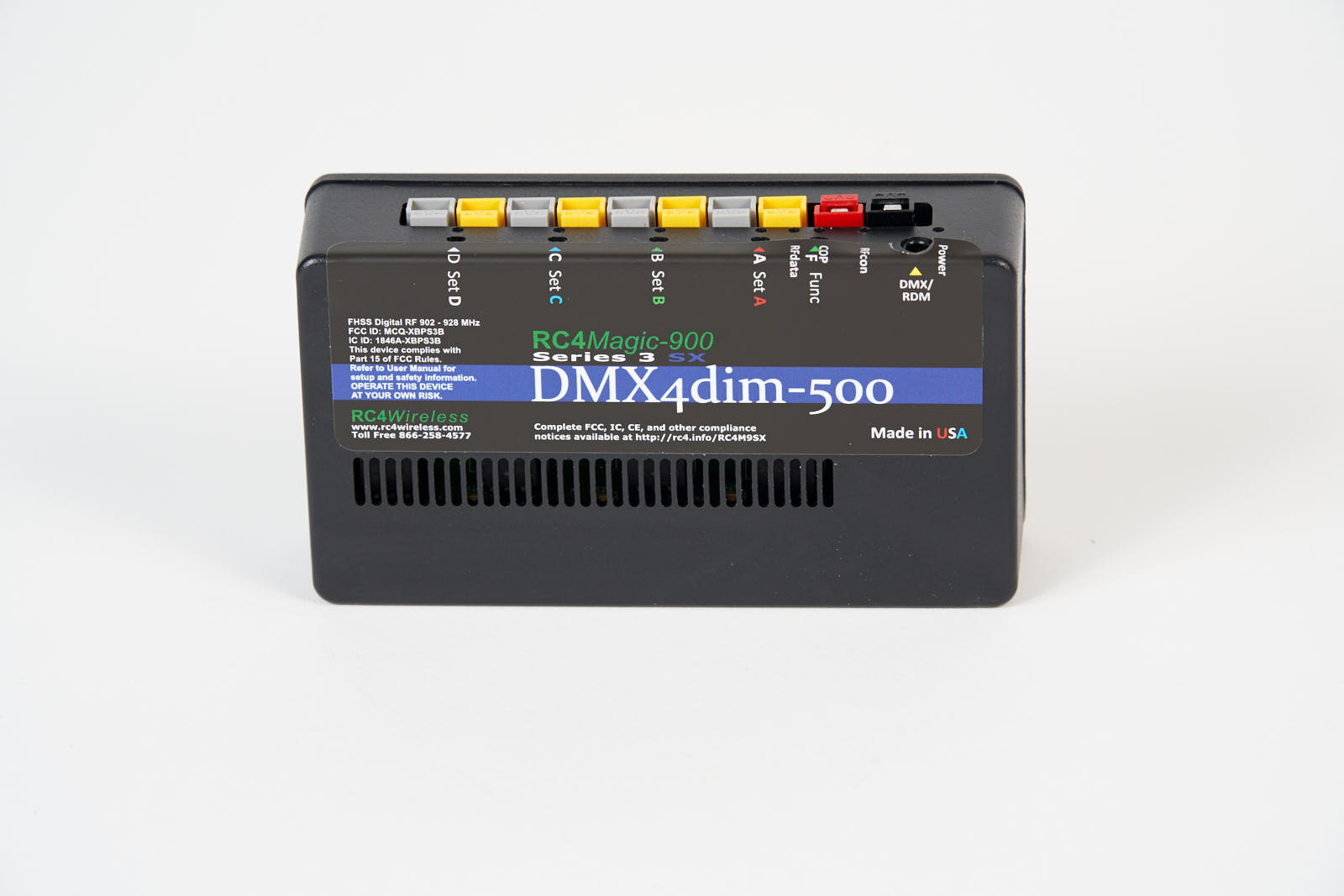 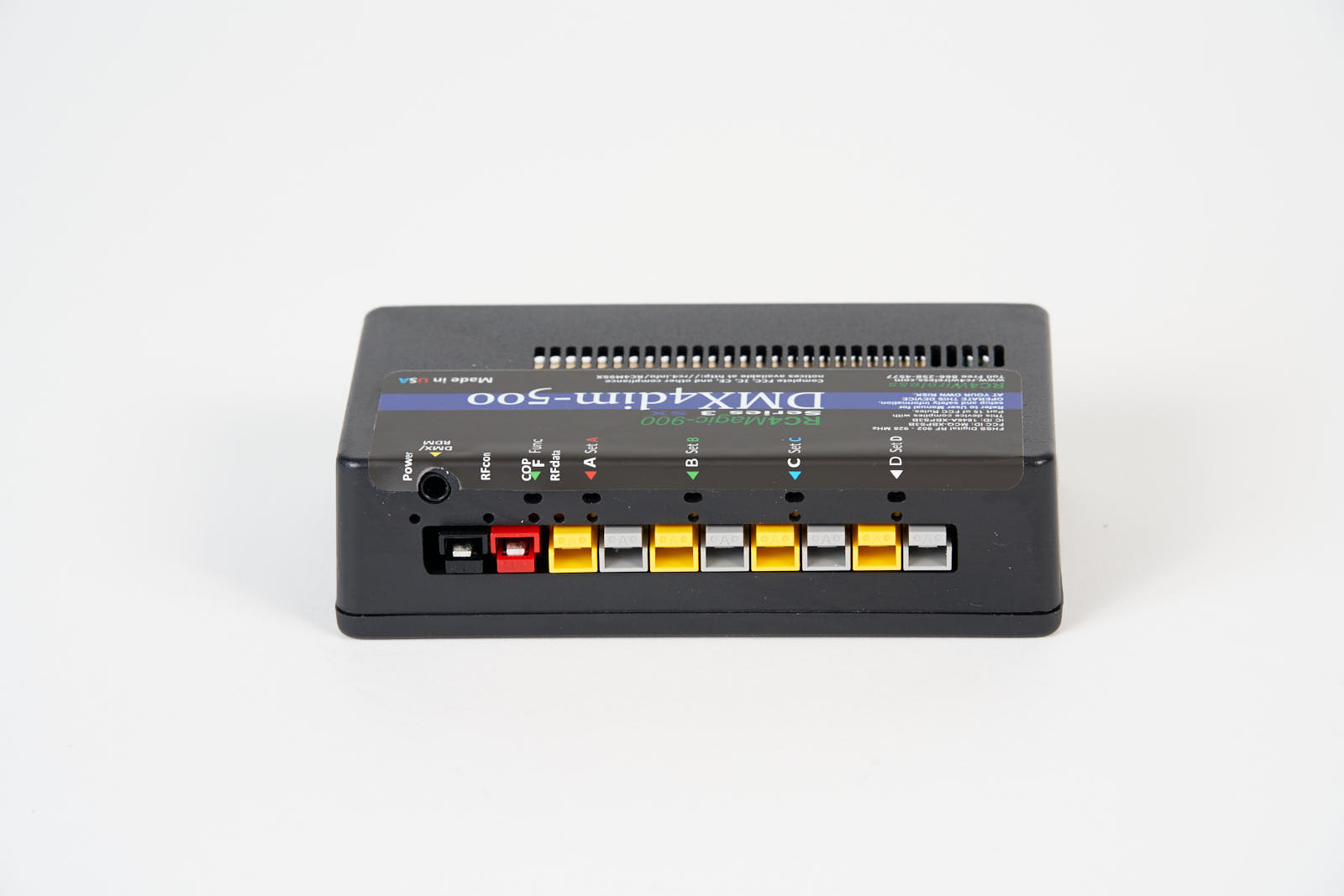 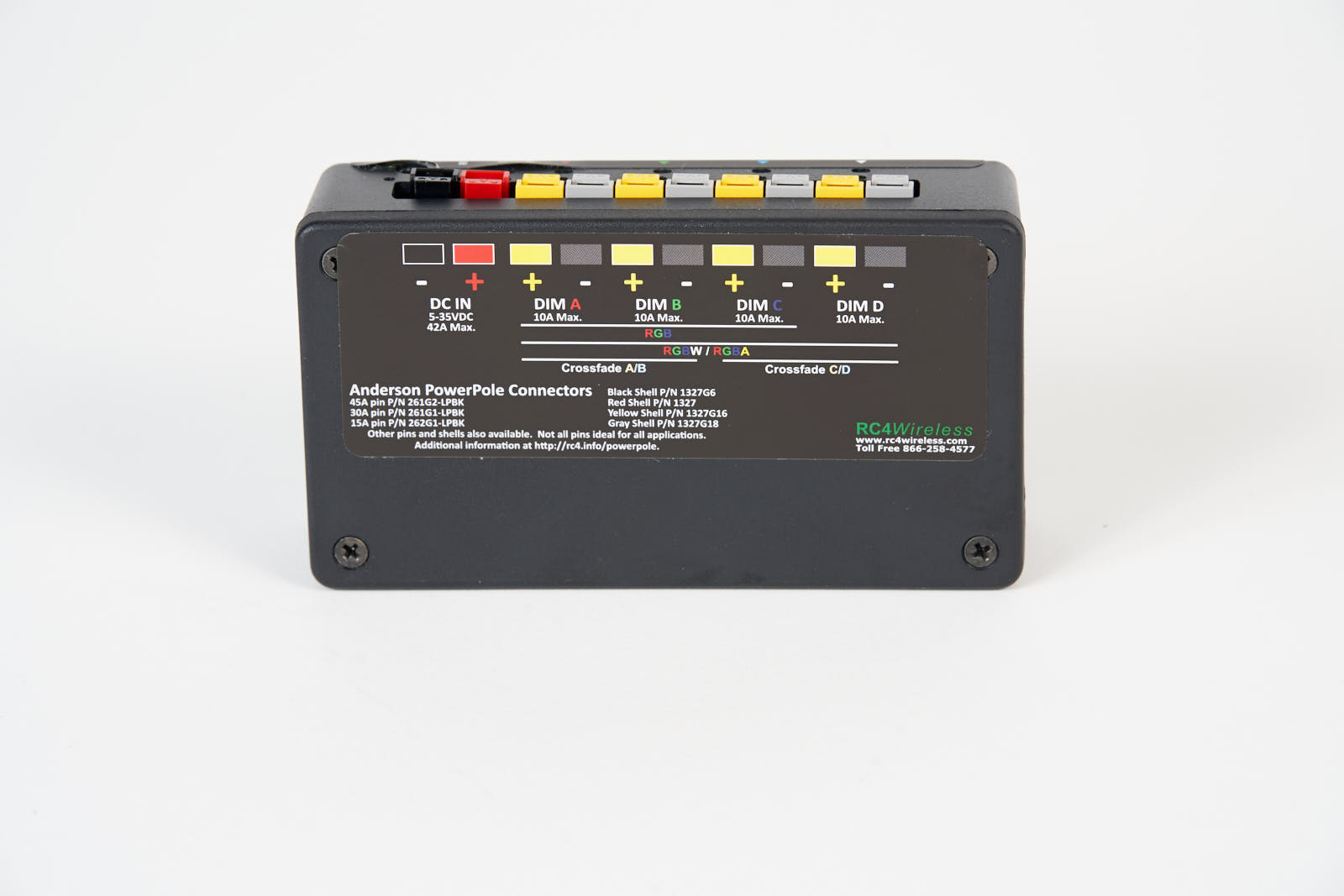 RC4’s most powerful dimmer in the 900MHz bandwidth, the RC4Magic-900SX DMX4dim-500, gives users four channels of dimming with a total current capacity of 500 watts at 12 volts and 1000 watts at 24volts. The RC4Magic-900SX DMX4dim-500 combines that classic features of the ever popular DMX4dim-500 and takes in into 900MHz. Interference from other wireless devices is literally a thing of the past when using the 900SX series of products, and the result is a signal that’s faster, more secure, and more reliable.

The RC4 Magic-900 DMX4dim-500 includes a built-in radio receiver and uses RC4 OneTouch™ for easy assignment of any DMX channel and dimmer curve to any dimmer with a single press of a single button. Device configuration can also be done with Remote Device Management (RDM) and RC4 Commander Configuration Software.

The SX Series of products now includes 19-bit dimming, which is eight times finer than 16-bit with a whopping 524,288 steps of resolution. For users, this means exceptionally smooth LED dimming, especially at the bottom end of the curve. All RC dimmers also feature Curve Tweak – the ability to fine-tune between true linear and true ISL to find the perfect fit for any particular LED source. You can even tweak each primary color differently. Dimming is suddenly as smooth as silk.

the DMX6dim is ideal for use with the dimmers built-in RC4 Flkr Effects Engine™. Using DMX channels for control, dynamic animated effects are easily and quickly created — this is not a canned effect generator, it is a tool for creating unique looks to suit any need.

The mini-plug wired DMX data port can be used with a range of RC4 DMX cables, including 3-pin and 5-pin male and female XLR adapters. The most common adapter is the RC4DMX5FA with 5-pin female XLR connector.  This port can output DMX data to nearby fixtures including fog machines, moving lights, and projector dousers. The DMX port can also be configured as a DMX input, allowing the DMX4dim-500 to be used as a wired dimmer.

Need to work with a battery pack? The RC4Magic-900 SX DMX4dim-500 is perfectly paired with the 30-volt battery belts that are used extensively in film.