RC4 OneTouch™ provides quick and easy selection of any dimmer curve you need.  Set one channel on your DMX console and tap a single recessed button — it’s simple! 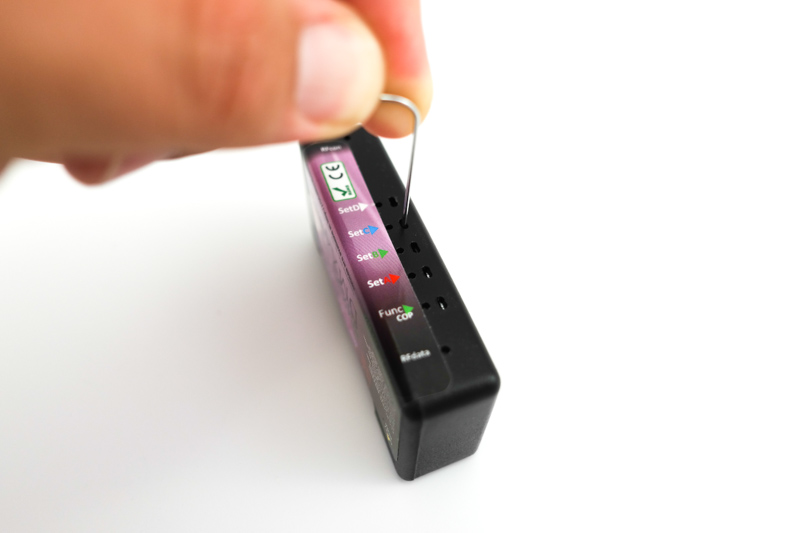 When the objective of a device is to be as small and inconspicuous as possible – to be invisible – the biggest challenge is creation of the user interface. Way back in 1993, RC4 Wireless recognized that wireless dimmers would get smaller and smaller, and a method of setting channels and curves needed to be scalable down to the tiniest sizes.

Our OneTouch™ system first appeared on RC3 dimmers in the 1990s (the predecessor of RC4), when the limitations of wireless technology could deliver only 32 channels, and curves were limited to Linear and Non-Dim. Inverse-square-law (ISL) for LED dimming followed shortly after (and still in the 90s!).

Today, RC4 Series 3 dimmers are equipped with multiple curves for lamps and LEDs, as well as inverted curves, curves for servo motor control (great for puppetry), and a curve for AC wave generation (ring a telephone!). There are curves with beautiful smoothing for LEDs, and curves for super fast strobing. You can even choose to control RC4 dimmer outputs with either 8-bit or 16-bit resolution, just by choosing the right curve.


Today, simple RC4 OneTouch™ makes it easy to assign any of 512 DMX channels with any RC4 dimmer curve to any RC4 dimmer with a single press of a single button. No matter how small RC4 wireless dimmers become, OneTouch™ will always provide a small and simple way to configure our devices without additional equipment or software.

The linear curve is perfect for incandescent (including halogen) lighting – traditional filament bulbs. With this curve, a DMX channel at 50% produces 50% output at the dimmer, which produces 50% lumen output in a lamp filament.

The ISL curve is optimized for light emitting diodes (LEDs). LEDs produce 50% lumen output when dimmer power is reduced to 25% (which is also why LEDs, on average, draw a lot less power than other lighting – small reductions in brightness result in large reductions in power consumption). You must use the ISL curve to make LEDs dim smoothly; do not use the linear curve for LEDs.

The Non-Dim curve includes hysteresis to ensure the dimmer output will never dither or oscillate, even if the assigned DMX channel is hovering around the toggle point. This is ideal for relays, solenoids, AC inverters, and anything else that needs cleanly switched DC power. Unlike using a traditional SCR-based AC dimmer as a switched AC circuit, the DC output of an RC4 Non-Dim output is absolutely clean DC power, limited only by the power handling rating of the dimmer components.

The Servo CW curve runs most hobby servo motors in the clockwise direction. The lowest DMX level produces a 1ms pulse and the highest level produces a 2ms pulse; pulses get longer as the channel level increases.