Operating in the 900MHz band– the fastest, safest, most stable wireless band– the 900SX DMXpix is recommended for customers in the US, Canada, Australia, New Zealand and Brazil. This is the only 900MHz pixel string driver on the market and it includes the RC4Magic Two-Year Warranty.. 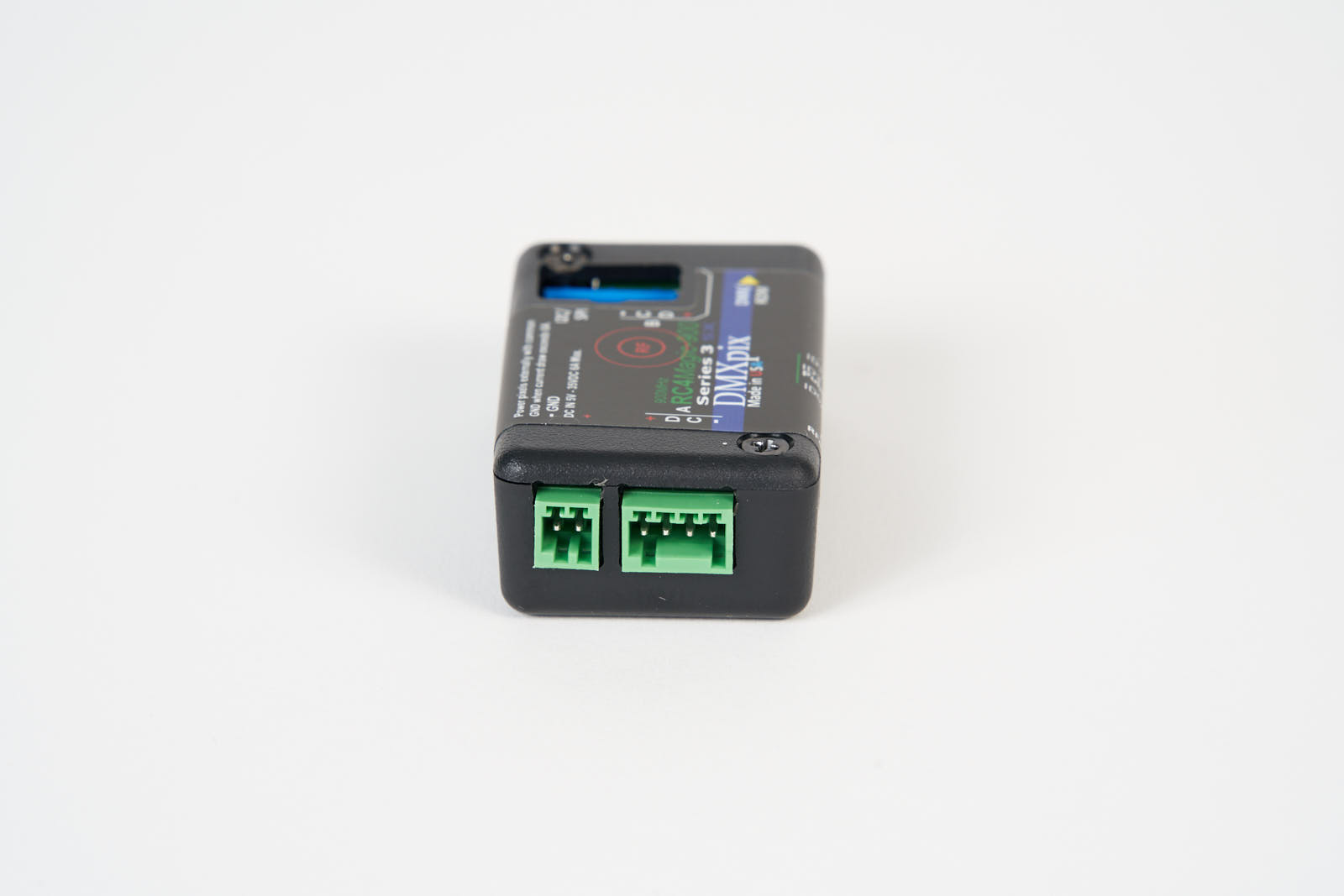 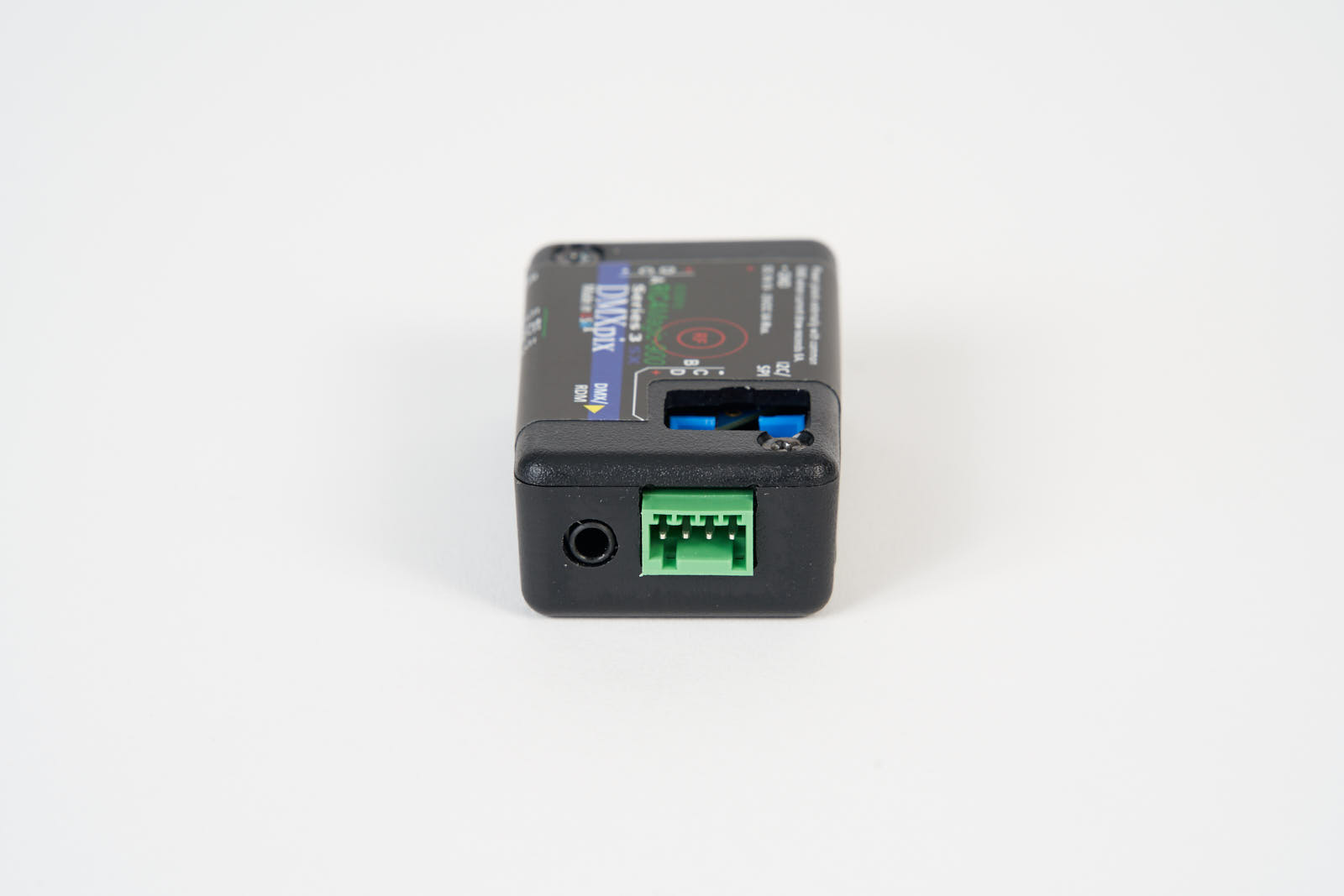 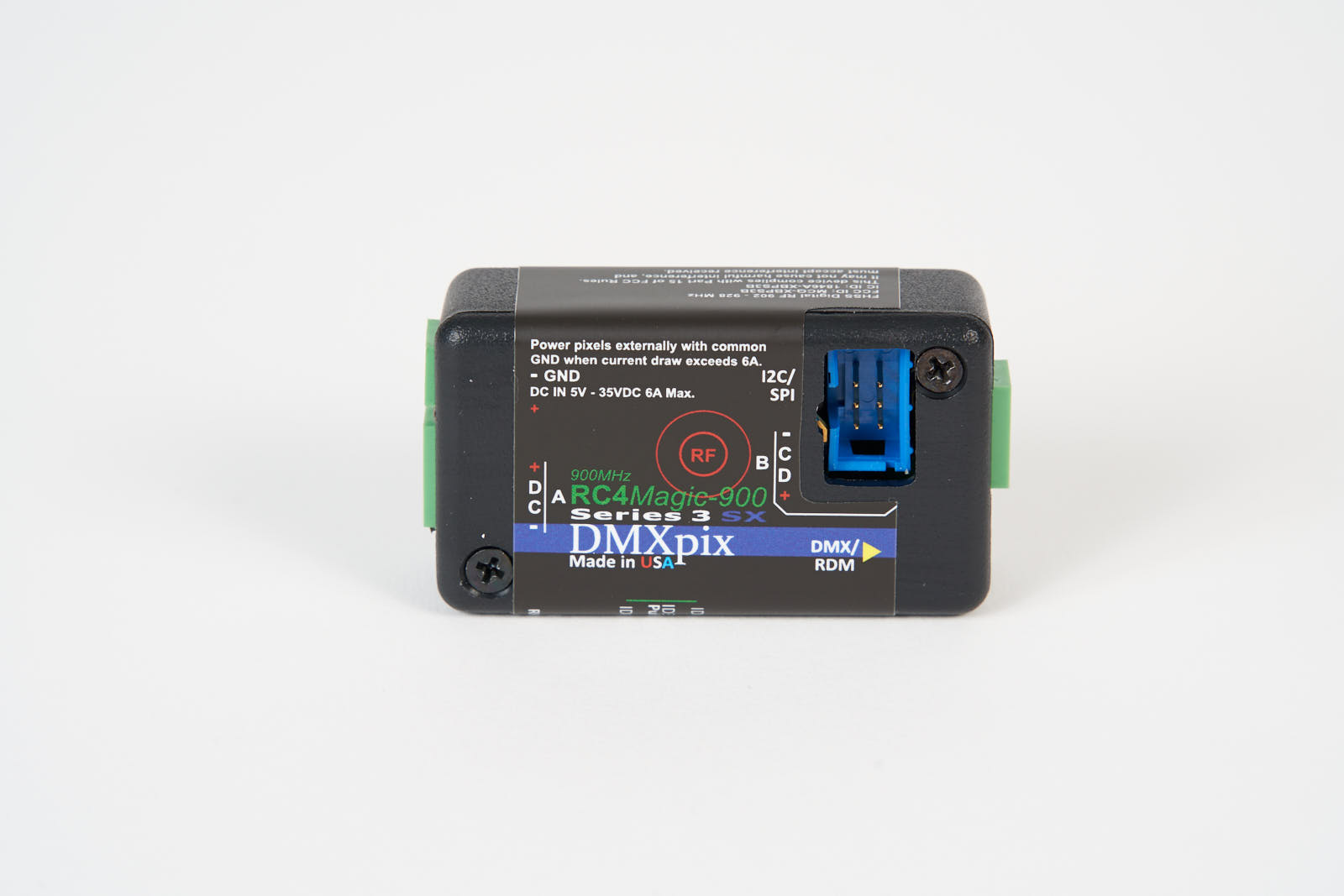 The RC4Magic-900SX DMXpix is a tiny wireless DMX driver for specifically controlling two strings (or other configurations) of pixel LEDs. It operates in the 900MHz band, which results in increased speed, improved security, and improved signal stability.

The original 2.4GHz RC4Magic Series 3 DMXpix is suggested for customers outside of the US, Canada, Australia, New Zealand and Brazil and for all international tours.

Need to create a pixel string with complex patterns and a variety of colors? The 900SX DMXpix makes it easy to do a variety of complex tasks without using excessive channels. Traditional mapping of DMX to pixel strings consumes vast numbers of channels — a single universe of 512 channels can control only 170 red-green-blue pixels. The RC4Magic-900SX DMXpix uses patent-pending RC4’s patented Custom Pixel Profiles to deliver the same design versatility and control to designers, while vastly reducing the number of console DMX channels required to render beautiful effects using up to 1000 pixel LEDs and generating up to 3000 output channels.

The 900SX DMXpix (and the original DMXpix) uses Keyframing, RC4 Custom Pixel Profiles™ feature, to create effects using any desired length of pixels, group multiple LEDs into larger “virtual pixels” if desired, and then tailor how the keyframe propagates down the pixel chain without needing additional DMX channels to do so.

Learn more about working with Keyframes and Pixel Profiles at the RC4 knowledge base.

Working with pixel strings with different chipsets can make color matching difficult. RC4 ColorMatch™, which is an integral part of the 900SX DMXpix, enables users to adjust the color balance of each string to ensure a consistent palette, even when combining products from different manufacturers, different control protocols, and differences due to variations in LED binning. By delegating this task to the 900SX DMXpix pixel driver, rather than managing this in a console or media server, multiple different pixel strings can be controlled from the same DMX channels without unsightly color variation

RC4Magic-900 operates in the 902-928 MHz RF band, licensed ONLY for use in Canada, USA, Australia, Brazil, and New Zealand. In other jurisdictions, including Europe, Asia, Africa and international tours, our 2.4GHz RC4Magic Series 3 system is ideal.