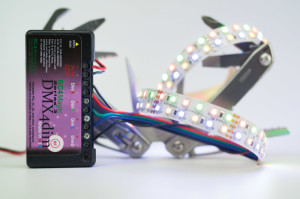 The ISL (Inverse Square Law) dimming curve is only part of how to make LEDs look great.  Unlike filament lamps, LEDs are amazingly fast (which is also why they are useful as emitters in fiber-optic data networking, switching on and off millions or even billions of times per second).

Single DMX control channels have 8-bit resolution: 256 steps.  When using incandescent lamps, these steps cannot be differentiated by the human eye, even when fades are slow, because filaments have natural persistence – they take time to heat up and get brighter, or cool down and get dimmer, with changes in dimmer power.  This smooth analog response is why traditional lighting is so visually pleasing, and why many lighting designers sometimes express dissatisfaction with LED lighting.

RC4 Wireless was one of the first pioneers to tackle this problem in the late 1990s and early 2000s.  Today, RC4 Digital Persistence™ makes LEDs look as pleasing as incandescent lighting, with no visible stepping and a wide range of user programmability to mimic a range of filament sizes.

Using RC4 OneTouch™, the ISL curve can be selected with or without RC4 Digital Persistence by using the ISL-Slow or ISL-Fast dimmer curve.  Using Remote Device Management (RDM) and/or RC4 Commander Configuration Software, RC4 Digital Persistence™ can be used with ISL or Linear curves, with 8 different user-selectable smoothing speeds.