The Little Mermaid | Tuacahn Center for the Arts 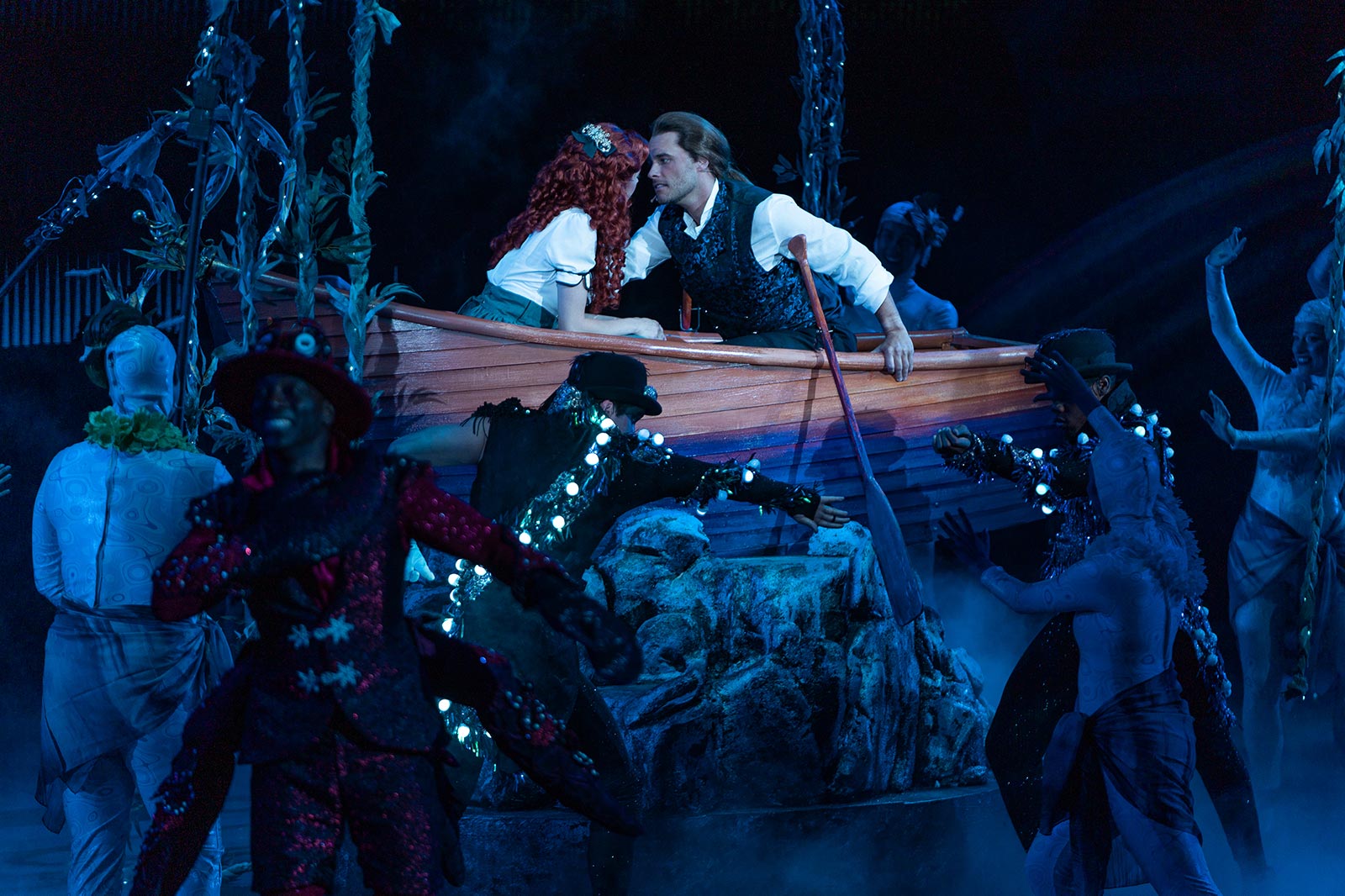 In the year 1836, the magical story of a mermaid and a king leapt out of the imagination of Hans Christian Anderson and became the beloved tale of “The Little Mermaid”. In the 150 plus years since then, the iconic, magical story – with the help of two Disney films – has become something of a phenomenon.

When the Tuacahn Center for the Arts, based in Ivins, Utah, decided to present their take on this theatrical classic, they turned to RC4 Wireless to create some magic all over the stage, which include costumes, set pieces and even props. “For pixel control of the Flotsam and Jetsam costumes we used a DMXpix — one for each piece. We used them with pixel domes, which are individually controllable pixels, but spaced out and capped with a plastic ‘dome’ to diffuse the light,” explains Adam Manning, Assistant Master Electrician at the Tuacahn. Manning wasn’t working alone on the project; the team also included Lighting Designer Nick Van Houten of NVH Design, Costume Designer Dustin Cross and Scenic Designer Adam Koch.

The illuminated costumes of Flotsam and Jetsam weren’t the only pieces using the DMXpix. It was also used in King Triton’s trident. Manning notes: “The DMXpix inside the trident provided approximately 4.5A – or 22.5W – for the pixel tape.”  The DMXpix is a pixel driver that can control a large number of pixels without a media server, and was the winner of a PLASA Award for Innovation when it was introduced. “The principle of the DMXpix is to move pattern repetition out of the lighting console and over to the pixel controller. The look of the pattern, what we call the Keyframe, is created on the console using a select number of channels, then the DMXpix does the job of replicating that pattern in a variety of user-configurable ways to control up to 500 pixels,” explains James David Smith, Founder and Chief Product Designer at RC4. “And, a single DMXpix can do all of that twice — it’s actually two drivers in one, each with its own Keyframe.”  The RC4Magic DMXpix is available in the popular 2.4GHz range for use worldwide and in the much less congested 902-928MHz band in the US, Canada, Australia, and New Zealand.

In terms of The Little Mermaid set, there was wirelessly controlled lighting in nine set pieces including “Two castle towers, Ursula’s shell, two King Triton towers and Ursula’s cauldron,” explains Manning. In terms of gear, “We used an RC4 MagicDMX4dim for each set piece to drive the LEDs on each unit,” explains Manning. The RC4 Wireless DMX4dim is one of the firm’s most popular products; it’s also the wireless workhorse at the Tuacahn. “We use the DMX4dim for everything,” states Craig Engel, production manager at the Tuacahn.  The DMX4dim is a 4-channel dimmer, also available in both 2.4GHz and 900MHz, and works with an RC4 DMXio Transceiver to control lighting—as well as servo motors, and much more—wirelessly. Manning continues: “For me, using the system to create magical wireless effects has been the go-to. The setup of the system is very simple and doesn’t take very long to do. Once the system is set up, it doesn’t take much to keep it working.” The system can be set-up manually with buttons and indicators on each unit or via RC4 Commander Configuration Software. “One thing I’m super proud of is that our new Commander software is backward compatible with most of our Series 2 devices, so it works with a mix of devices going all the way back to 2011. It is Series, Model, and firmware-version aware, so what you see is accurately what you get when viewing and setting parameters on screen,” explains Smith.

As with all wireless units, placement is key. “We build our set pieces with a steel frame, so keeping a clear line-of-sight from the transmitters to the receivers is critical for consistent operation.  As long as the units are enclosed in a material which is transparent to radio waves, keeping a clear connection isn’t an issue,” says Manning.

Manning has been working with RC4 Wireless equipment for the past three years. “Once the system is set up, it just works. Of course, I do have to make the rare call for troubleshooting help. When I have called customer support, they have been very helpful at providing quick and effective solutions. They are very knowledgeable about the hardware and can provide answers to any questions quickly,” says Manning.

Engel has been working with RC4 gear even longer. “I have been associated with the theater for 10 years and RC4 has been the wireless system in use. They have the absolute best customer support bar none of any vendor I deal with and their equipment is super reliable and innovative,” Engel concludes.