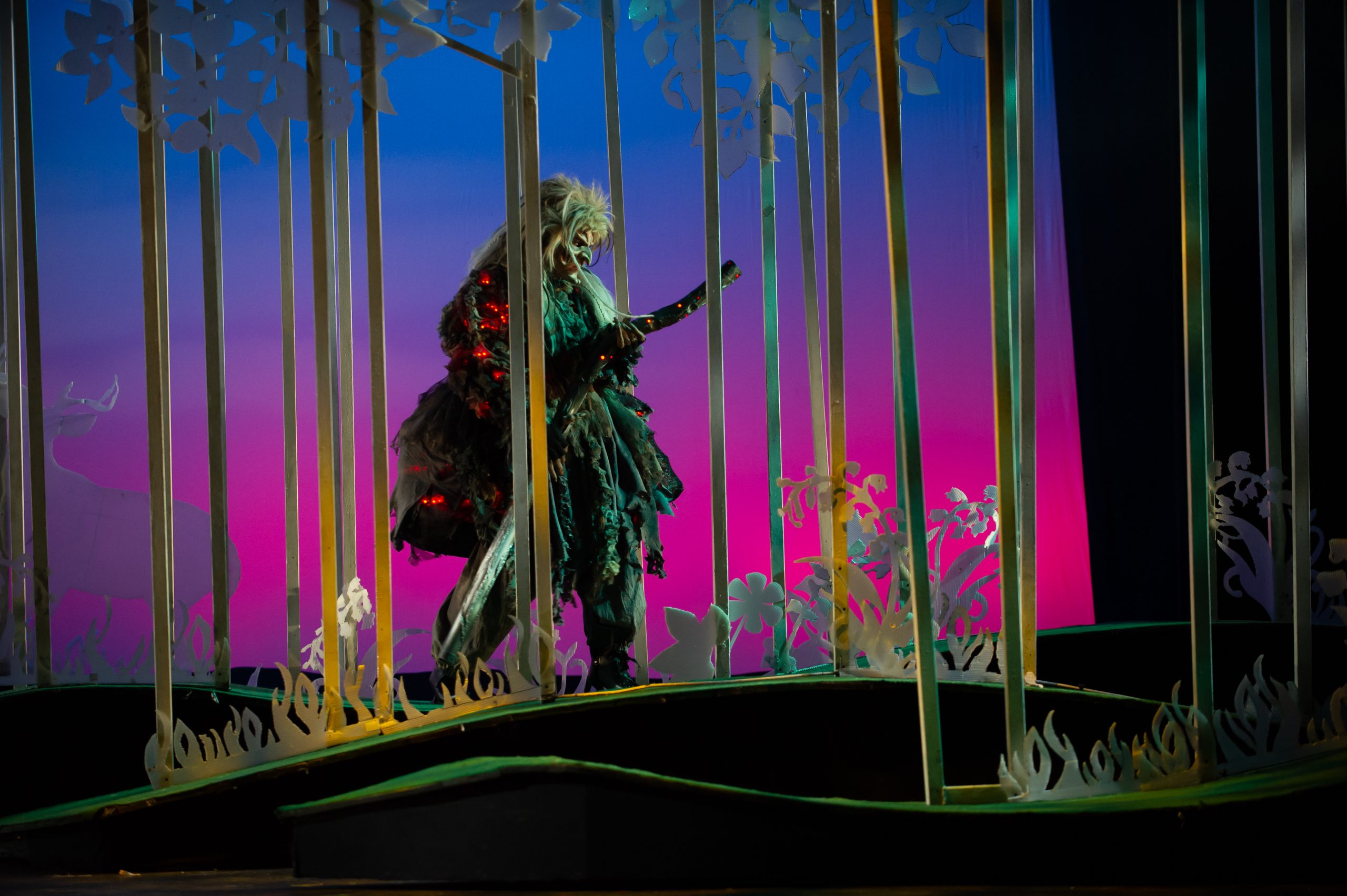 When you need an ugly witch to become magical, where do you turn? When he was working on the production of Into the Woods at the Utah Festival Opera & Musical Theatre, Lighting Designer, Chris Wood looked to RC4 Wireless products. For the production “We used 3 RC4 Wireless 2.4GHz DMXio Data Transceivers and 3 DMXpix units. Two DMX Pix units were used in the dress, and the third was in her staff so that we could continue the magic animation from her dress to the staff,“ explains Wood.

The dress was the creation of Costume Designer, Mallory Prucha. Wood explains: “Mallory sent me her rendering of the ugly witch dress and I immediately saw the image of magical energy building in the panniers, like fireflies, and then spiraling around her torso to her arms, and finally down to her hands.” The idea resonated with Prucha and Director, Valerie Rachelle. “Knowing the action of the LEDs in advance allowed for Valerie to incorporate the LEDs into her direction of the witch. Whenever the witch performed magic, had an emotional moment, or a decision to make, her dress would react appropriately,” said Wood.

The LEDs were cleverly concealed within the dress. Wood says: “Our Master Electrician, Matt Robson, and Craft Artisan, Sarah Beth Stewart, worked together on creating pouches hidden in the panniers for the equipment and batteries.  Mallory came up with horsehair tubes that contained the pixel tape and wiring. These tubes allowed movement of the tape while the actress moved in the costume relieving stress on the tape and avoiding restrictions on her mobility.”

The RC4Magic DMXio and DMXpix were a perfect solution for Wood and Programmer, Omri Schwartz. “We had multiple versions of effects and pixel maps for the dress that we used depending on the witch’s mood. The great thing about using the DMXpix versus an Ardino unit is that we could, on the fly, make changes giving Omri maximum flexibility to make the changes I asked for,” notes Wood.

The DMXpix offered Wood a variety of benefits. “The size of the DMXpix made it easy to hide within the costume, not to mention how lightweight it is. We were able to utilize its ability to mirror output A and B, plus we were able to group pixels as a unit. This allowed us to reduce the number of addresses needed to control the panniers. It’s a powerful device,” says the Lighting Designer.

Wood has been working with RC4 Wireless products for a decade. “So many things can be made simpler by throwing a wireless dimmer on it – table lamps, chandeliers, fridges and so on. Initially, the price can be scary but over time, it balances out.  The time saved with equipment that you know works and will continue to work makes up the difference. Some of the theaters that I design at don’t have the budgets to purchase but they do take advantage of RC4’s rentals,” he adds.

In the end, Wood has one favorite feature of the RC4 product line. “They are reliable; the only times that I have had a failure of a wireless lighting element was due to user error. Their customer support is also a huge plus,” he concludes.