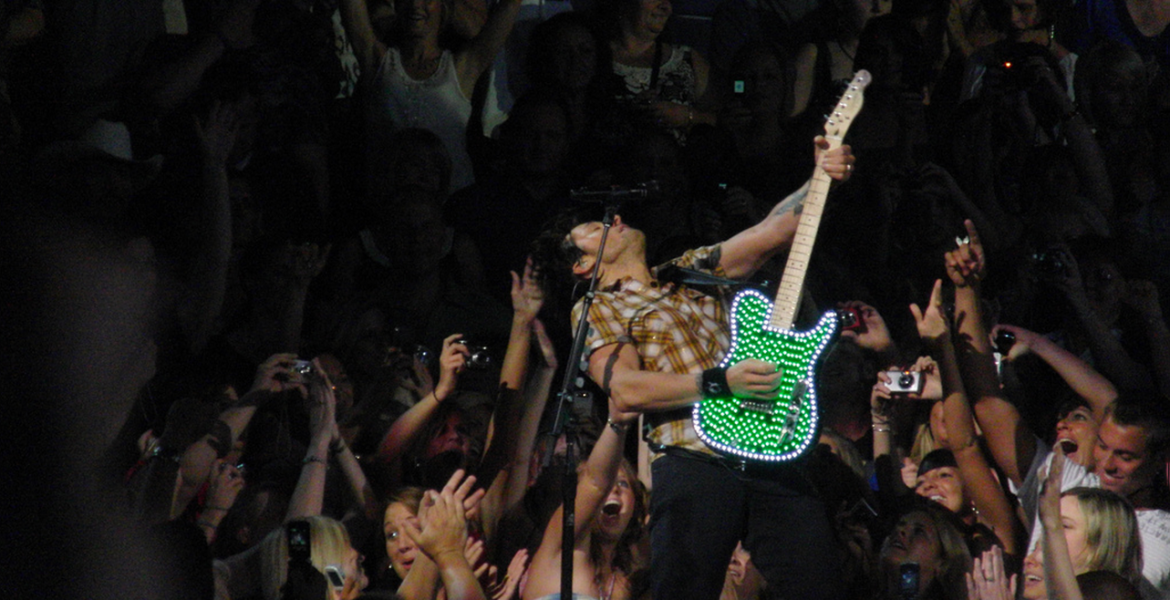 Making an illuminated guitar with LEDs might seem easy.  Get some LED ribbon, batteries and a switch, right? But what if you want to control it in real time, seamlessly integrated with the rest of your show control? This is where the RC4Magic system comes in.  By adding an RC4Magic DMXio transmitter and an RC4MagicDMX4dim wireless dimmer, Strictly FX immediately had multiple LED dimmers on DMX channels, just like all the other lights and effects in the show. 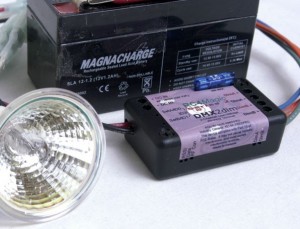 Here at RC4, where all the fun begins and never really ends, we’re updating the terms and conditions of our warranty to make it even more attractive to our valued customers.

Of course, all warranties in the free world must be “limited,” with carefully considered boundaries and restrictions on what can be sent back for free repair.  But I, James David Smith, exalted president and CEO of RC4 Wireless, have an unusual aversion to lawyers and legalese; I don’t want a team of ivory-tower attorneys coming anywhere near my business policies and practices.

Which leads us to our

Send us some examples of what you think we should explicitly NOT cover under warranty.  Here are some examples:

1. RC4 Wireless will not provide warranty service for units that have been operated under water.

2. If you decide to do your own repairs with a blow-torch and plumber’s solder, we’re not fixing that mistake for free.

3. Do not flood your RC4 dimmer with gasoline and set it alight; you will be saying bye bye to that one, end of story.

Why bother to submit a suggestion?

If we use your submission in our published warranty, we will give you a FREE RC4Magic DMX2dim dimmer pack.  That’s a $429 value.  Seriously!  This isn’t some lousy “win a chance to win” scam — if we like what you come up with, you actually can win!!  And, presuming some good ideas come our way, we expect to use at least five of them.  That means five lucky winners!

Don’t put your great idea on Facebook, or some other public place; if you do, it becomes public domain.  No no no!  If you want a chance to win, you must send your idea to me — personally.  Send your brilliant little quip in an email to notcovered@rc4wireless.com, along with contact information so we can reach you if you’re chosen.

I look forward to a very full inbox.  Thanks!

P.S.  In case you’re not familiar with our current warranty, before we revise it, have a look at https://rc4wireless.com/support/warranty/.

Why are my lamps weak and blinking off and on?

When channel levels are brought up, the load (lamp, motor, etc.) operates for a brief moment then goes off. A second or so later, it comes back on. The problem appears cyclical or intermittent.

When a lead-acid battery is measured with no load it reads approximately 12V. This is true even for a substantially discharged battery. RC4 electronics require very little current to operate, and a discharged battery still provides enough power for the receiver to come on and indicate traffic.

…And the cycle starts all over again.

In some cases, exactly the same symptoms are caused by undersized wire or poor connections between the battery and the RC4 receiver. These cause resistance, resulting in a voltage drop at the receiver when the load increases (Ohm’s Law).

This cycle through steps 1, 2, 3 and back to 1, results in the symptom described. The actual cycle time varies with battery size, battery charge, the size of the load, power levels selected, and wire sizes used. Eventually the battery is damaged and fails to drift back up enough to continue the cycle.

Why are my fades not smooth? Why do the lamps blink in and out?

Fades are not smooth, channels intermittently black-out for a second or more.

The RC4 system depends on RF signals getting from the transmitter to the receivers. An antenna is under the top cover of each RC4 wireless device — one at the transmitter, and one in each receiver.  (This, by the way, is why we use tough ABS plastic enclosures: they are transparent to radio waves; metal cases are not.)

RC4Magic operates in the 2.4GHz band using spread-spectrum digital radio. Although output power is quite low, high frequency signals bounce easily and receivers are very sensitive. This means that receivers can find good data most of the time.

The system will not work, however, if the tops of the plastic enclosures are blocked with batteries or metal coverings. Signals must be able to get in and out of the top of each box, both at the transmitter and at each receiver.

Make sure the top area of each plastic enclosure — usually marked on the label as the RF Hot Spot — is not blocked by batteries or metal obstructions. These block radio signals.

Small clusters of wiring, gridwork, bars across the top of the enclosures, etc. generally DO NOT cause problems. Make sure there is a path for SOME signal to get through and the system should work fine.

Where line-of-site cannot be acheived, or there are numerous obstructions between transmitter and receiver:

RC4 technology is VERY tolerant of signal degradation and electrical noise. Most users have no problems… in fact, at the time of this writing only a handful of radio interference problems have ever been reported with an RC4 system. If you think you’re suffering radio interference problems, FIRST be absolutely certain your batteries are good and you are within the 200 – 300 foot operating range.

In early 2011 it came to our attention that a firmware bug was inadvertently released.  If you are experiencing choppy dimming and/or very long connect times when a receiver is first powered on, please contact RC4 for free update.  This update is free.  If your unit is out of warranty, all you pay is shipping.  If it is in warranty, we pay the shipping both ways.  We apologize for this inconvenience.

How do I operate more than one RC4 system in close proximity?

You need to operate two or more RC4 systems in close proximity without interference.

We’ve taken care of part of this problem for you at the factory.  Every user is issued their own set of unique digital IDs.  Nobody else has your IDs.  If you set up your system, and someone else sets up their system right beside you, neither of you will notice at all.  Your receivers are under your control; their receivers are under their control.  There is nothing you have to do to ensure this happens.

RC4Magic Series 2 systems are provided with 3 unique IDs and a Public ID.  Each unique ID can be operated completely independently.  Thus, if you have enough pieces in your system, you can setup a DMXio to transmit on each different ID, and set receivers to sync to whichever one you prefer.  Each separate ID is a completely separate digital network that supports its own complete DMX universe.  If you include the Public ID, that’s four universes of wireless.

The Public ID is a little bit less secure than your 3 unique IDs.  Every RC4Magic Series 2 system we have ever sold has the same Public ID (hexadecimal 999).  If you need to combine your RC4Magic devices with someone else’s so you have one big system, set all the pieces on the Public ID.  As long as nobody else is using the RC4Magic Public ID within 300 feet of you, your system will perform flawlessly.  It’s extremely unlikely that the user in the next theatre or in the rehearsal space upstairs is also using the Public ID; they will be using one of their unique system IDs.